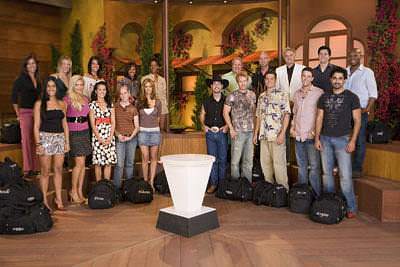 It's been a decade since it aired, and forever since we talked about it, but Big Brother: All Stars still stands tall as one of the greatest seasons of any competitive reality show. This marks the beginning of a season-long retrospective covering the twists and turns of the game from the moment the cast entered the house to the moment the winner was crowned.

...but first, we have to choose a cast! The gimmick of Big Brother has always been allowing audience control over the houseguests but this season took that to the next level by letting the fans and cats at home decide who they would get to judge all summer; and, of course, any all-star season only starts after a frenzy of pre-game paranoia and scheming. In the first episode of this series, we follow the campaigning in public, the plotting in private, and the growing hype for what promised to be an incredible season of televisoin.

If you like what you hear - or just the idea of an audience being in control - consider supporting us via our new Patreon page! This Big Brother series is free but Patrons will get to choose which shows we give this treatment to and have exclusive access to those episodes in the future, among many other things.

As always you can listen below, here, or on iTunes here.


Posted by Dominic Harvey at 5:52 PM No comments:

We Have a Robcast 2 with Rob Cesternino

Five years after his first podcast with us, Rob Cesternino returns for a deep dive on life at the helm of RHAP, the future of TV podcasting, and his place in the Survivor media.  Find out how a web show became a community and where it's headed next when you listen below, here, or on iTunes here.

Posted by cstone at 5:35 PM No comments: The first official eviction hasn't even happened yet and two have already fallen with others trying their best to get medevaced. We wanted to talk about the show while there are still people left to talk about so today we bring you an in-depth look at the first two weeks, from a serious discussion of 'pandas' and PTSD to a curious discussion of Paul and his powers. You can listen below, here, or on iTunes here.

Posted by Dominic Harvey at 12:39 PM No comments: