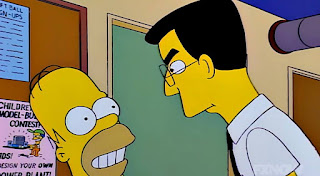 We know there's an anonymous clan of slack-jawed troglodytes out there who loves The Simpsons as much as we do, so we decided to act on it at last. With resident kwyjibo Colin on the loose for the day, friends and well-wishers Mike Bloom and Lita Brillman tagged in to discuss a show that defined a generation. What made the golden years of The Simpsons so magical, and when/how did it change? Do the modern seasons face too much criticism, and have the early seasons held up over time? And is Frank Grimes just Homer's Enemy, or should he be ours too? Drive around in our van solving mysteries below, here, or on iTunes here.